Between Despair and Hope: Cuban Rafters at the U.S. Naval Base Guantánamo Bay, 1994-1996

The Rafter Crisis of 1994 and the U.S. Response

“If the United States fails to adopt immediate and efficient measures to stop the encouragement of illegal departures from the country, we will be duty bound to instruct our coast guards not to intercept any boat leaving Cuba.”

In 1993, the U.S. Coast Guard rescued 3,656 Cubans at sea.  Already by July 1994, over 4,700 Cubans had risked their lives to escape the island.  Between June 4 and August 4 of that same year, Cubans trying to flee the island had made seven attempts to hijack ferries and other vessels in the Bay of Havana.

On Friday, August 5, 1994, thousands of Cubans gathered along Havana’s Malecón after rumors raged through the city that a fleet of boats was coming from Miami to pick up any Cuban who wanted to leave the island.  When police attempted to disperse the crowds, protests erupted with chants of “Freedom!” and “Down with Fidel!”  Demonstrators threw rocks and bottles at shop windows and tourist-only hotels.  After police arrested hundreds of people and broke up the protests, Fidel Castro toured the Malecón.

In various press conferences and speeches in the following days, Castro repeatedly sent the message that Cuba would not stop any vessel attempting to leave the island.  By the end of the month, over 21,000 Cubans of all ages had set out to sea in rafts and boats headed for the United States.

Rafts and Rafters at Sea in the Florida Straits 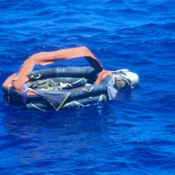 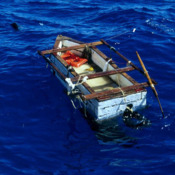 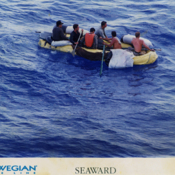 “Today, I have ordered that illegal refugees from Cuba will not be allowed to enter the United States.  Refugees rescued at sea will be taken to our naval base at Guantánamo, while we explore the possibility of other safe havens within the region.”

By August 17, more than 500 Cubans were leaving the island daily, and on August 20 that number more than doubled when almost 1,200 persons attempted to cross the Straits of Florida to freedom.  U.S. President Bill Clinton sought measures to address the growing crisis and Castro’s threats.  Haunting his administration was the specter of the 1980 Mariel boatlift during which 125,000 Cubans flooded the shores of Florida.  A riot by Mariel detainees in custody at Fort Chaffee, Arkansas contributed to then-Arkansas Governor Clinton’s losing re-election bid that year, and U.S. Attorney General Janet Reno served as the Florida State Attorney General for Dade County (today Miami-Dade) during the Mariel boatlift.

Prior to the rafter crisis of 1994, the United States automatically granted political asylum to Cuban refugees arriving at its shores, usually releasing them into the custody of relatives or other sponsors immediately after being processed by immigration officials.  To avert another major exodus from Cuba, the Clinton administration reversed this 35-year-old open-door policy.  On August 19, the White House announced that all Cubans intercepted at sea would be taken to the U.S. Naval Base at Guantánamo Bay, Cuba, and all Cuban refugees who reached American soil would be detained by the Immigration and Naturalization Service while their cases were reviewed.  The U.S. Coast Guard launched Operation Able Vigil to enact the Clinton administration’s new directive.  This change in American policy indicated that the United States would no longer consider Cubans as refugees escaping a repressive regime but instead as immigrants seeking economic opportunities, a distinction that is still hotly debated.

“It was better to leave Cuba and go to Guantánamo, or die at sea, rather than continue dying little by little.” 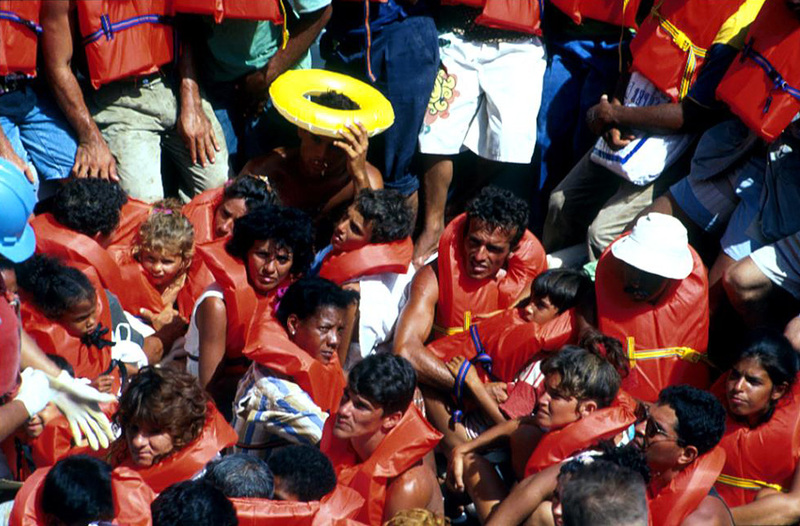 Courtesy of the U.S. Coast Guard 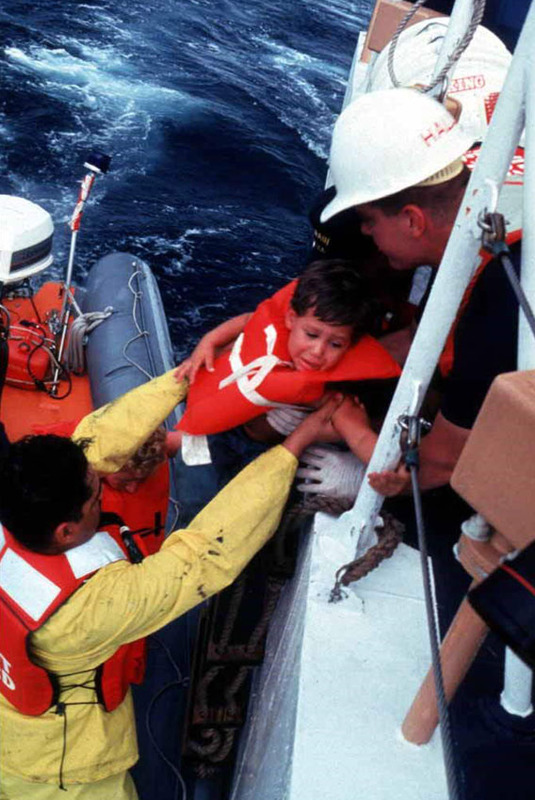 Courtesy of the U.S. Coast Guard

Cuban refugees faced several possibilities when taking to the seas in their search for freedom and opportunity.  All rafters faced at least 90 miles of turbulent waters across the Straits of Florida, overexposure to the sun, short supplies of food and water, and the deadly company of sharks.

The lucky ones reached the shores of the U.S. themselves, touching land on the east coast of Florida, anywhere between the Florida Keys and Palm Beach County.  Others were spotted in their rafts out at sea by Brothers to the Rescue, a Cuban exile organization that in 1991 began to fly airplanes over the Straits of Florida to search for rafters and ensure their safety.

Many rafters were intercepted by the U.S. Coast Guard and transferred to U.S. Navy “mother ships” for transport to the refugee camps at the naval base at Guantánamo Bay.  The least fortunate, whose numbers are immeasurable, were lost at sea.

“We spent 3 days and 3 nights at sea…We went through a serious storm the second night.  The next day it looked like a shipwreck…we were lying all over the place, all five of us on the raft…We had brought a ham in some plastic bags, and the bags broke…we were all awake…watching to make sure that no one would stick out a foot, because we all knew that we were surrounded by sharks.”